Ped (Jirayu La-ongmanee) was a shy boy who had never listened to music until introduced to the world of Pop and Rock by would-be childhood crush Ern (Nattasha Nualjam). Ern soon left for Bangkok, however, and it is six years later in their final school year when she is re-introduced to Ped and his brash best friend Koong (Pachara Chirathivat). Koong convinces Ped, along with schoolmate Ex (Thawat Pornrattanaprasert), to form a band, partly to be cool and attract girls, partly as an attempt by Koong to try and one-up his popular twin brother Kay. Their musical talents aren’t great, but that doesn’t stop them from trying. However, when Ern decides to lend them her outstanding guitar skills, Ped and Koong’s shared attraction to her puts a strain on the band’s survival, as well as their friendship. 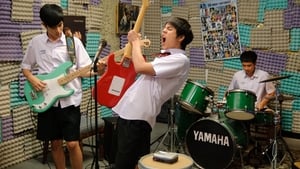